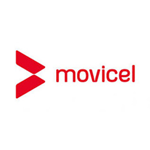 The Movicel carrier from Angola is denoted by codes: 631 04. The followings IDs are called HNI (Home network identity). This code is created by the combination of two other Mobile Country Code (MCC) and Mobile Network Code (MNC). The first three numbers stand for the MCC and they are used in order to identify the region which the carried comes from (in the following example it’s Angola). The last numbers of the HNI code are equal with the MNC and this ID is given for the specific mobile network operator.

Besides Movicel Angola has assigned country code + 244. This number + 244 is equal with international calling code and it’s simply the telephone dialing prefixes used for calling Movicel numbers.
Movicel uses 2 GSM bands, 2 UMTS bands, 1 and 0 CDMA bands.. You can read the specific frequency bands in the table below. All bands of the Movicel are display in MHz units.
Another important information in Movicel Angola architectures is the standard of used protocols. It also uses 5 protocols such as GSM, UMTS, LTE, CDMA.

The ISO standard code of Movicel is AO. You can see more info about this mobile network operator at http://movicel.co.ao/. How to check Movicel coverage? How to check if your phone will work in Angola? Those information will help you figure out if your device will work in the Movicel roaming. Use out database and check out if your device will be locked or unlocked in Movicel.

Use our CARRIER LOOKUP TOOL in order to make sure that your phone number is usingMovicel network.

If you'd like to find out whether your device is going to work with Movicel (Angola), please check the details below:

All you need to do is compare bands specification from your mobile network with the bands used in your device. You can check the supported bands for your phone by using out phone database.

Use our About Us Page in order to give your feedback, send suggestions or report an error